Nothing can be more annoying than a ceiling fan not doing its job, circulating air. On a hot day you want to be able to feel the cool breeze of the fan. Depending on the age of the fan and how it was installed, there can be numerous reasons for the lack of circulating air. To help troubleshoot the problem here are some things to look for.

src=”https://beloblog.com/wp-content/uploads/2019/09/Westinghouse-7850500-Elite-Ceiling-Fan-5132041-1.jpg” alt=”westinghouse-7850500-elite-ceiling-fan-5132041″ />New ceiling fans are expected to produce lots of air movement. But, fans can only produce up to the amount of a breeze that it was designed for and with proper installation. The distance a ceiling fan is from the ground and ceiling are very important measurements. The blades should be as far away from ceiling as possible. On an 8 foot ceiling, blades should be at least 10 inches from the ceiling for maximum air movement but not less than 6 inches. For every 2 inches less than 8 inches of clearance there is a 25% loss in airflow.

Recommended Blade Height: For best air movement from a fan mounted on a ceiling height of 9 feet, install at 8 feet from ground. For ceilings 10 feet in height or higher, it’s best to have blade height between 8 and 9 feet.

Blade Pitch: Check the blade pitch (angle). It could be at a low angle. 12 degrees or more is recommended but keep in mind a pitch greater than 16 degrees will move a lot of air.

*Number of Blades: The amount of fan blades changes nothing to the cfm’s. What is affected is the noise levels and efficiency. 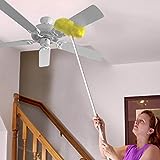 With most existing fans, the motor is usually the last thing to give out on the fan.

Most often if the fan is still running, the drive capacitor is weak and needs to be replaced.

The blades are not moving.

All speeds do not work.

Check for a bad reverse switch. If it’s good, then check the pull chain switch. If you are using a remote control (wall or hand held), the receiver or transmitter could be bad. For detachable type housing, replace entire control assembly if a problem is present with speed or reversing of fan.

Make sure the fan is receiving full power.

Fan will not reverse.

Check the REVERSE switch on the fan. The switch may not be set to either the forward or reverse setting.

Note: If the fan works in one direction but not the other, then the reverse switch is bad.

The light turns on but the blades don’t move.

Turn your fan on and press the REVERSE button and listen for a ‘click’ sound. If the sound is present you will need to replace the receiver if you are using remote control.

Ceiling fan is wired on the same switch as your lights and the lights works – it may be a defective fan switch.

There is a humming between pulls of the chain – it could be a capacitor that has gone bad.

The light does not turn on and blades do not move.

Make sure the pull chain and wall switch for the light is in the “on” position.

Make sure there is power to the fan.

If power is present, change the batteries if you are using a remote. Also, the receiver for the remote could be bad, they are very sensitive to power surges.

Check to see if any wiring has come loose inside the canopy.

Should I Get a Cheap Ceiling Fan?

belo
Sport lamps have a significant role to play in the entire experience of sporting activities. Every sports lover and enthusiast that goes to enjoy...

Know Your Space: How Much Light Do You Need ?

BeloBlog.com is a participant in the Amazon Services LLC Associates Program, an affiliate advertising program designed to provide a means for sites to earn advertising fees by advertising and linking to Amazon.com